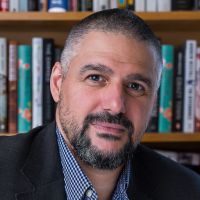 Chris Bucci represents bestselling and award-winning fiction and non-fiction authors including, Highway of Tears by Jessica McDiarmid; Is Gwyneth Paltrow Wrong About Everything? by Timothy Caulfield; and The War Widow by Tara Moss.

Chris began his career at the University of Toronto Press as an acquisitions editor in the social sciences. He joined HarperCollins Canada in 2003 as a non-fiction editor and then moved to McClelland & Stewart. In 2008 he joined The McDermid Agency as a literary agent and later bought the agency, along with Martha Webb. In 2017 they merged with the Cooke Agency to form CookeMcDermid where Chris was Proprietor and Literary Agent before coming to Aevitas in 2020.

Chris represents a broad range of both fiction and non-fiction as an Aevitas agent based in the NY Metropolitan area. He aims to work with some of the culture’s best writers, thinkers and experts—authors whose work helps us to interpret and understand our times as well as our future.

That Case Is Not Here

Bad As All That

Chevy in the Hole

Your Day, Your Way

To All Agents
Fiction
Health and Psychology
Aevitas Creative Management