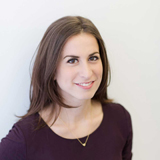 As an Aevitas agent based in New York, she is most interested in narrative nonfiction in the areas of popular science, big ideas, history, humor, pop culture, memoir, and reportage, in addition to voice-driven literary fiction with a bold plot and fresh, imaginative characters. She’s excited by strong female and underrepresented voices, the strange and speculative, and projects that ignite cultural conversation.

One and the Same: My Life as an Identical Twin and What I've Learned About Everyone's Struggle to Be Singular

Stars of David: Prominent Jews Talk About Being Jewish

99% Perspiration: A New Working History of the American Way of Life

All the Names They Used for God

The World Between Two Covers: Reading the Globe

Classical Mythology A to Z

Sex, Race, and Robots: How to Be Human in the Age of AI

Untitled on Bias in AI

Incarceration Nations: A Journey to Justice in Prisons Around the World

The One That Got Away

The Compatibility Gene: How Our Bodies Fight Disease, Attract Others, and Define Our Selves

The Orphan of Salt Winds

The House in the Orchard

Women in the Valley of Kings

The Apple II: How the Computer Became Personal

The Beauty Suit: How My Year of Religious Modesty Made Me a Better Feminist

How to Be a Friend to a Friend Who’s Sick

Apocalypse: Rediscovering Our Past and Surviving Our Future

American Eden: From Monticello to Central Park to Our Backyards: What Our Gardens Tell Us About Who We Are